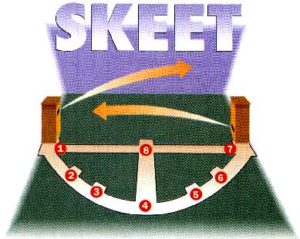 Skeet is shot on a field with 2 machines facing each other, 40 yards apart. One is located 10 ft. above ground in a structure referred to as the high house. The other is 3 ft. high in the low house. Targets always fly the same path but the angles are changed as the shooters move around the field and attempt shots from 8 different stations, a maximum of 5 shooters make up a squad, but only 1 shoots at a time. The machines are self loading and electrically released from a control cable. A round of skeet for one person consists of 25 shots. The first shot scored lost in any round shall be repeated immediately and the result scored as the twenty-fifth shot. Should the first twenty-four targets of a round be scored dead, the shooter shall take his or her optional shot, a low house eight only. The object is to score the greatest number of broken targets.

Trap uses one machine located in a bunker 16 yds. in front of the shooter. The trick here is that the machine constantly swings back and forth so that when the shooter calls for a bird he/she has no idea in what direction it will emerge. A maximum of 5 shooters can participate with only one firing at a time. Shooting is fast paced and exciting. A round for one person consists of 25 shots, five each from 5 different shooting stations, the object being to score the greatest number of broken targets.

Five Stand is very similar to Sporting Clays in that a wide variety of targets are thrown. No two five-stands are exactly alike. There are five “stands” or stations to shoot from. There are usually somewhere between 6 and 8 traps that throw targets. Participants shoot in turn at each of the 5 stands and various combinations of targets are thrown from the traps. Usually there is a menu card that will advise the shooter of the sequence of targets. Five Stand is a great way to get a Sporting Clays like experience in a small amount of space, with very little walking